The Hamiltonhill area of Glasgow is located between Maryhill and Possilpark to the North of Glasgow City Centre. It has a high proportion of gap sites, including three recently demolished schools and others resulting from housing clearances, with its remaining stock being well kept and popular four in a block ‘cottage flats’. The area has traditional ties to Saracen Street in Possilpark with more limited connections to Maryhill and the West End due to the southern and western edges being bounded by the Forth and Clyde Canal.

Collective Architecture initially prepared a Masterplan for Queens Cross Housing Association that considered how best to integrate new housing and complimentary uses in relation to the specific challenges of the site and its relationship with neighbouring areas, services and facilities. This was undertaken in conjunction with Glasgow City Council and Scottish Canals ‘What Floats Your Boat’ Charrette which considered the wider environment of the North of Glasgow and broader strategic connections and challenges. The Charrette resulted in the Canal/ Hamiltonhill Development Framework.

The Hamiltonhill Masterplan has been developed based on a specific and aspirational vision for Hamiltonhill that projects a thriving, fulfilled and growing community.

A sustainable housing mix has been identified that reflects the RSL’s current demand and takes into account the variety that is required to deliver a successful development for the private sector. Phases have been identified that reflect the complex project aims and constraints and will be modified in response to development capacities. The current layout takes account of appropriate variety to contribute to delivering a sustainable urban development.

Massing, architectural design, landscaping and streetscaping have been considered in response to local planning guidance and national policy framework for best practice. The topography of the site and existing service layout have had significant impacts on the development proposal. In line with project principles each development Zone has a mix of private and social housing.

The brief for phase 1 was to develop a mix of new homes for social rent and private sale that respond to the principles set out in the Masterplan and approved Planning Permission in Principle.

The first phase of development is located to the North East of the site, near the local centre of Saracen St and bounded by Hobart, Bardowie, Carbeth and Stonyhurst Streets. This phase is formed of six distinct blocks with associated streetscaping and provides 208 new homes for social rent and private sale, made up of two and three storey houses, townhouses, mainstream flats and wheelchair adaptable flats.

SUDS is provided via a series of tanks associated with green spaces around the site, providing attenuation and two levels of treatment prior to discharge into the Scottish Water main surface water infrastructure (the remainder of the site will discharge into the Forth and Clyde canal as part of the Metropolitan Glasgow Strategic Water Drainage Partnership).

The existing material palette of Hamiltonhill and its surrounding environment is inconsistent, ranging from sandstone tenements to pebbledash ‘four in a block’ cottage flats. Many of the more recent housing developments have made attempts to respond to the materiality of nearby sandstone tenements.

The majority of the traditional tenements are found lining busier roads such as Saracen Street and are predominantly red or blonde sandstone. The contemporary response to this has largely been to use a combination of red and buff bricks to mimic the colour tones of the sandstone, with varying success.

The intention for the new development is that the materiality is informed by and reflects the green open space within the site and the adjacent Claypits Local Nature Reserve, providing a neutral but complementary backdrop to the green/blue active travel routes and new parks and landscape. 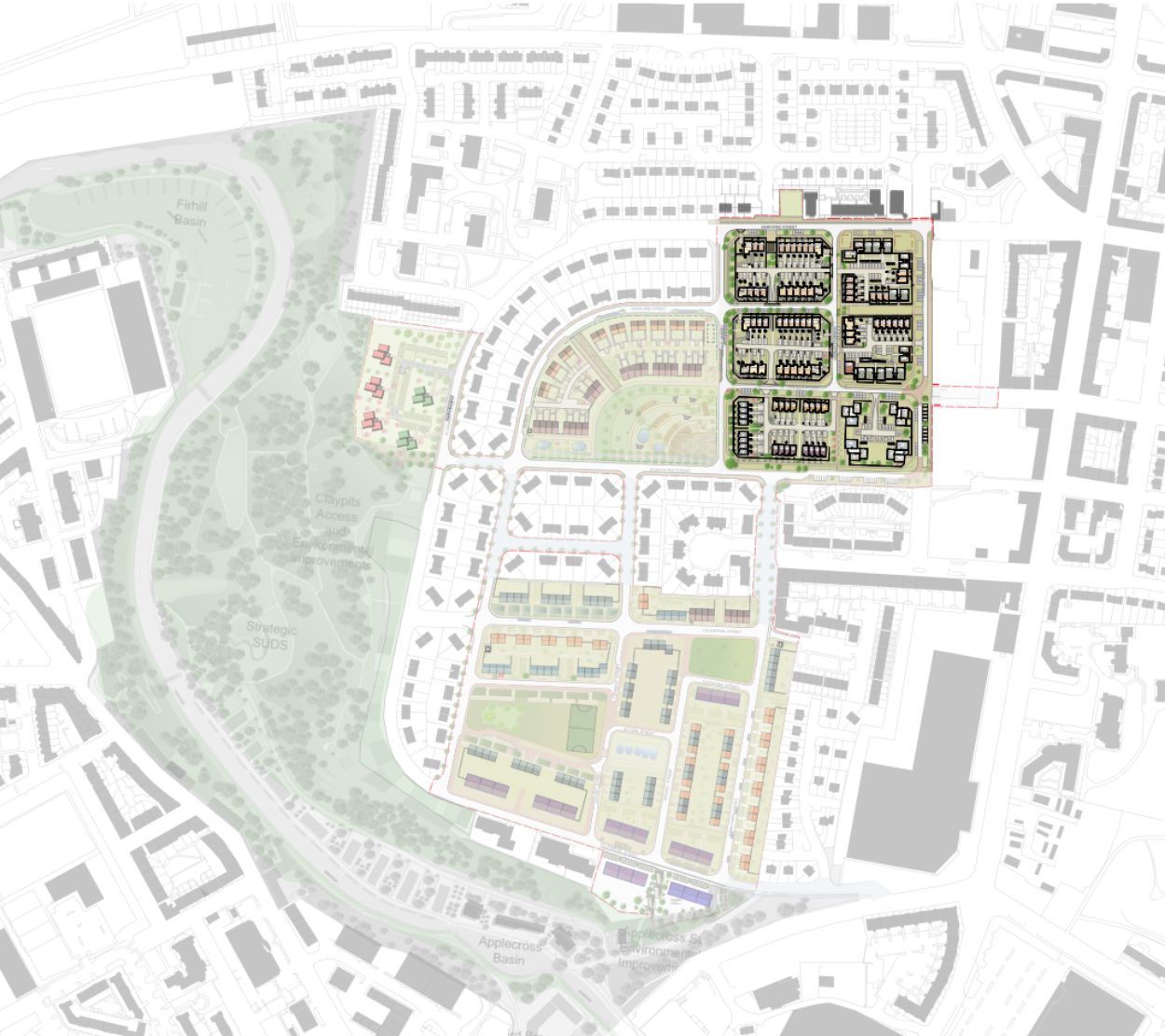 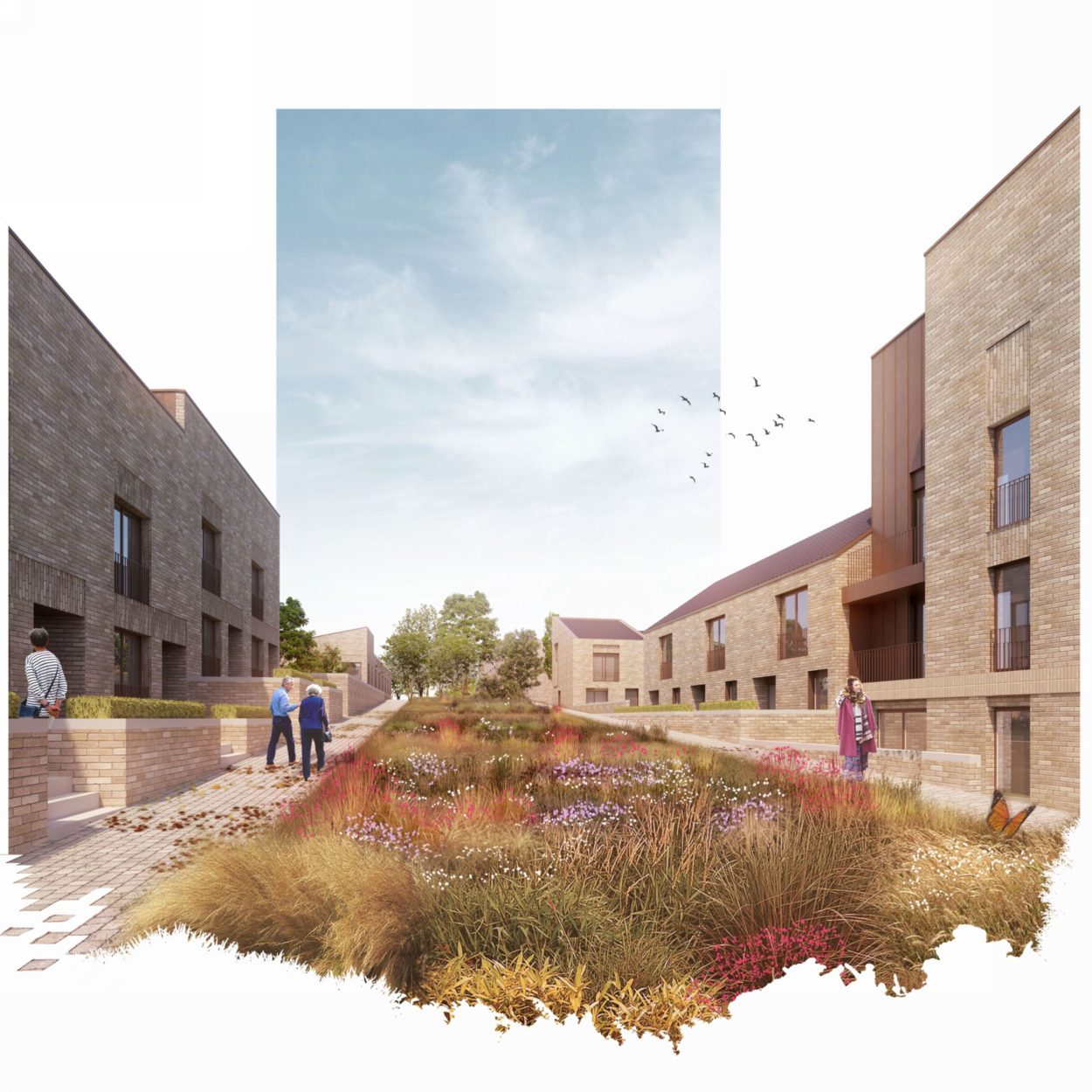 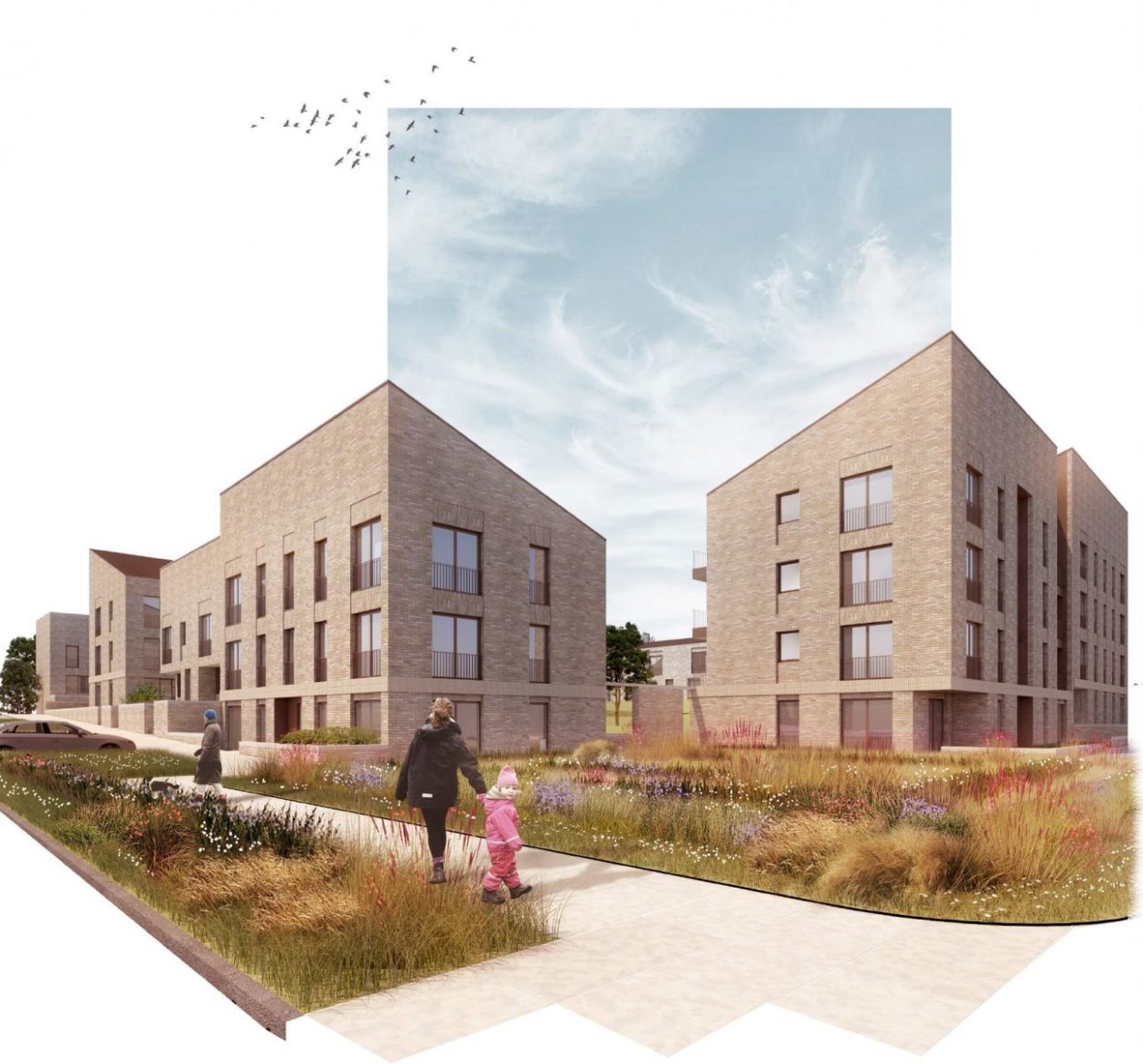