Collective Architecture has completed Anderston Phases 4 & 5 on behalf of Sanctuary Scotland. This marks the completion of the overall regeneration of Anderston, a process which has taken 14 years to complete. The final phase provides an additional 206 new build flats, with a mixed tenure of social rent and mid-market rent.

Collective Architecture’s design for the final two phases reinstates an important section of Argyle Street that was removed in the 1960s as part of the Comprehensive Redevelopment of Anderston. Argyle Street was an important historic route into the city centre that became disconnected by the construction of the Kingston Bridge and the associated demolition and redevelopment of the Victorian tenements in the Anderston area. The site was redeveloped in the 1960s with system built 11 storey slab blocks of flats that ignored the historic street pattern and dealt with the significant level changes across the site with a large retaining wall structure at the heart of the site, where a busy section of Argyle Street had once stood.

Anderston Phases 4 & 5 restores some important vistas into the city centre from Glasgow’s West End and vice versa. Critically it stitches Anderston back into the surrounding area, including neighbouring Finnieston, now a thriving area of restaurants and bars.

Five new buildings, varying in height from four to seven storeys, front the streets around the site. Houldsworth Street to the rear of the site, is now lined with large south facing communal gardens that accommodate the level changes across the middle of the site, and the new buildings are pulled back into the site to form the street edge to the reinstated missing section of Argyle Street.

The new buildings are designed to address two frontages, with street elevations onto existing roads around the site and new routes within the site. In addition, garden elevations overlook generous amenity spaces within the development open to the public. Living rooms face onto main streets and are articulated with window openings that respond to the pattern and scale of the Victorian tenement, examples of which continue to line the opposite edge of St Vincent Street. Garden elevations include large kitchen windows and are articulated to be read as facades that are as equally important as those that sit directly onto a street edge.

Collective Architecture has employed a simple palette of materials to articulate these double fronted blocks of flats, namely a clay brick, a concrete brick, sandstone and some areas of powder coated aluminum cladding. The two St Vincent Street elevations are finished in sandstone and reflect the existing tenements directly opposite. The garden elevations to these blocks are completed with a grey flecked concrete brick, which picks up on some of the tones of the sandstone. This is used on the 4 storey buildings that line a second new street, an extension of Pembroke Street, which intersects the reinstated section of Argyle Street at its midpoint. A red buff brick is used on the two new blocks that address Argyle Street, referencing the warehouses that used to stand at the site onto Houldsworth Street.

Finally, stair closes are picked out on the garden elevations with powder coated aluminum cladding, painted to match the dark greens of the windows. The treatment of the closes serves to break up the garden elevations, making the ends of the blocks read as small ‘freestanding’ towers.

The reinstated section of Argyle Street and the new section of Pembroke Street provide pedestrian and cycle access to the rest of Anderston and connect to new amenity spaces and play spaces that are located across the whole of the site. The hard landscaping, which was designed in house by Collective Architecture, employs materials some of which were ‘seconds’ and destined for land fill, as well as Victorian cobbles that were removed from Glasgow and relocated to Cumbernauld in the 1960s. These areas are now being redeveloped and the opportunity to return the cobbles to Glasgow, form part of the conceptual design of the reinstatement of Argyle Street.

The site is completely car free, with the 129 mid-market rent flats within Stage 5 marketed as car free with 0% parking. The 87 units for social rent within Phase 4, are provided with 45% allocated parking spaces on the perimeter of the site to the edge of Houldsworth Street. 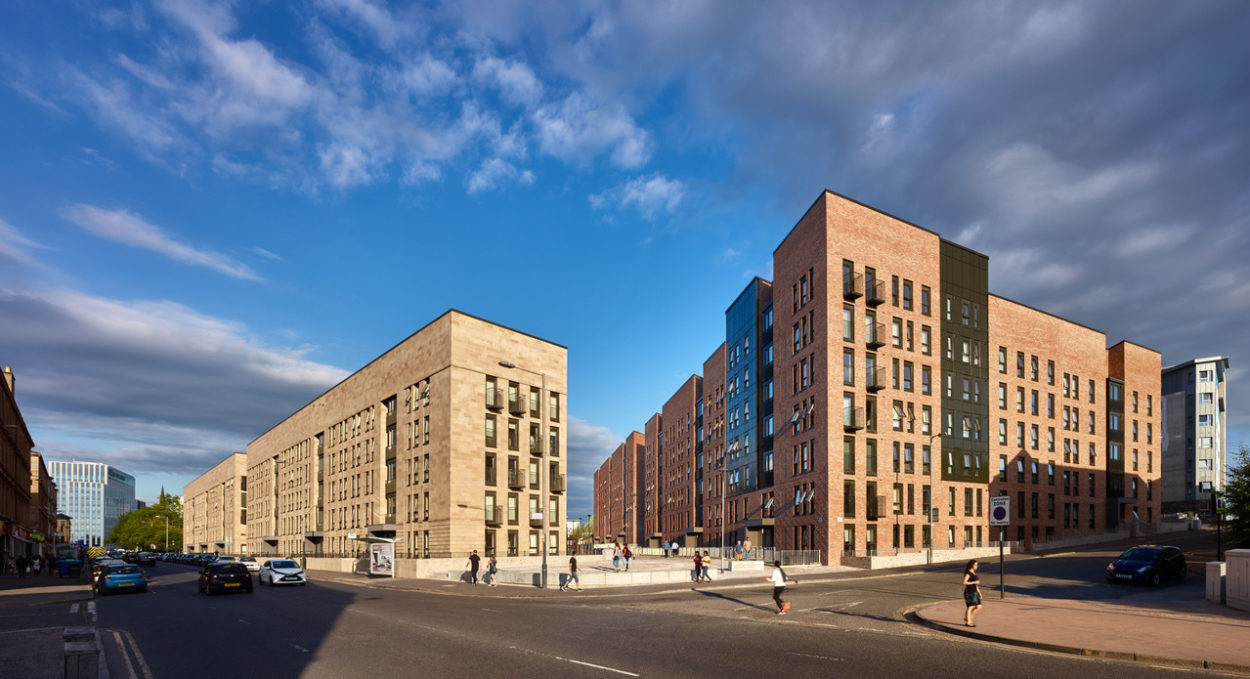 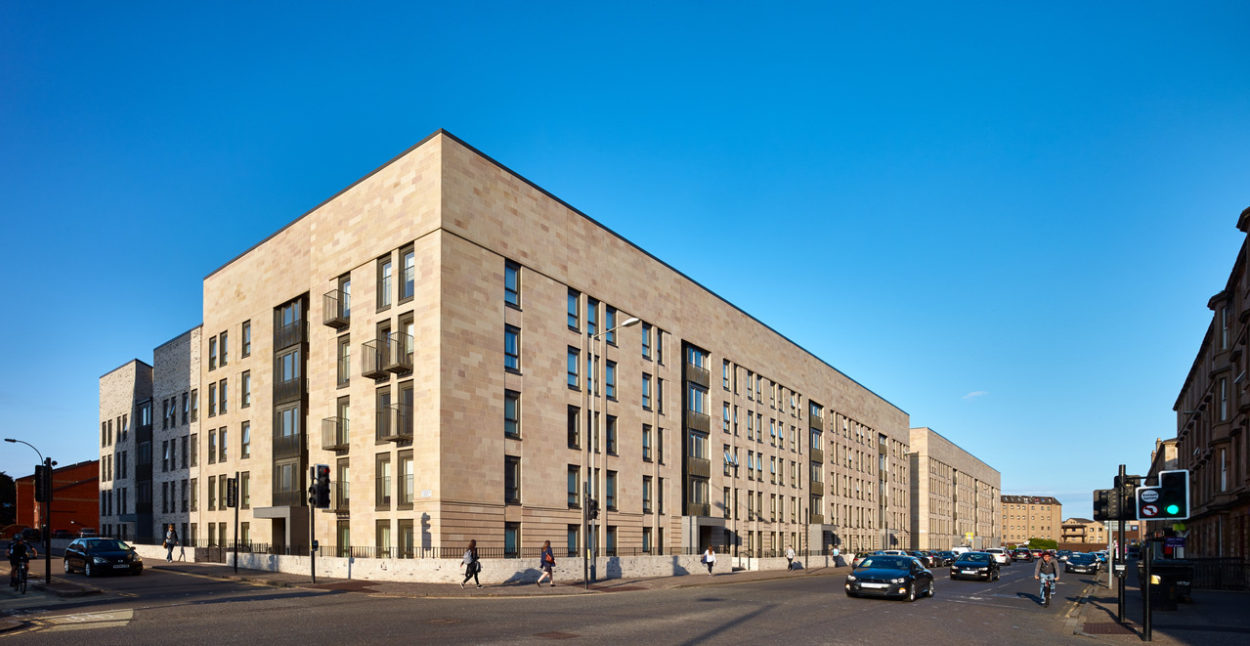 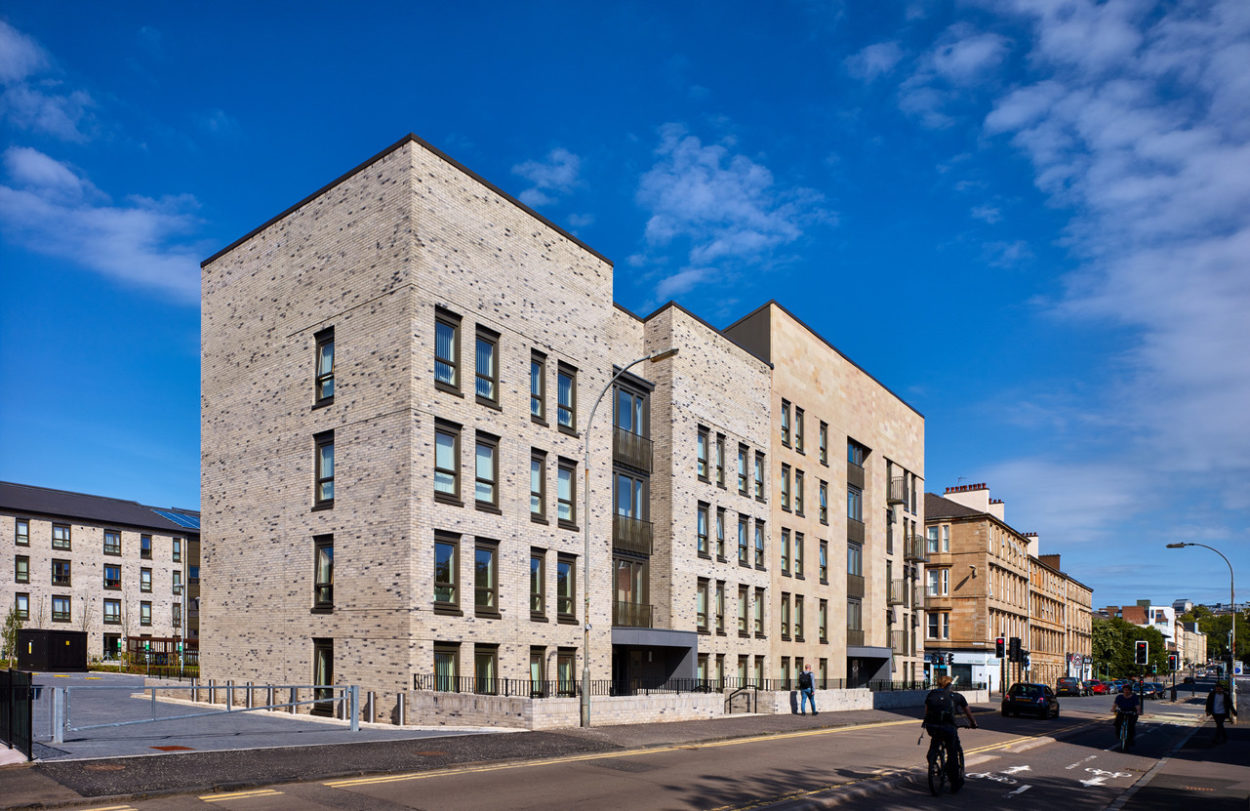 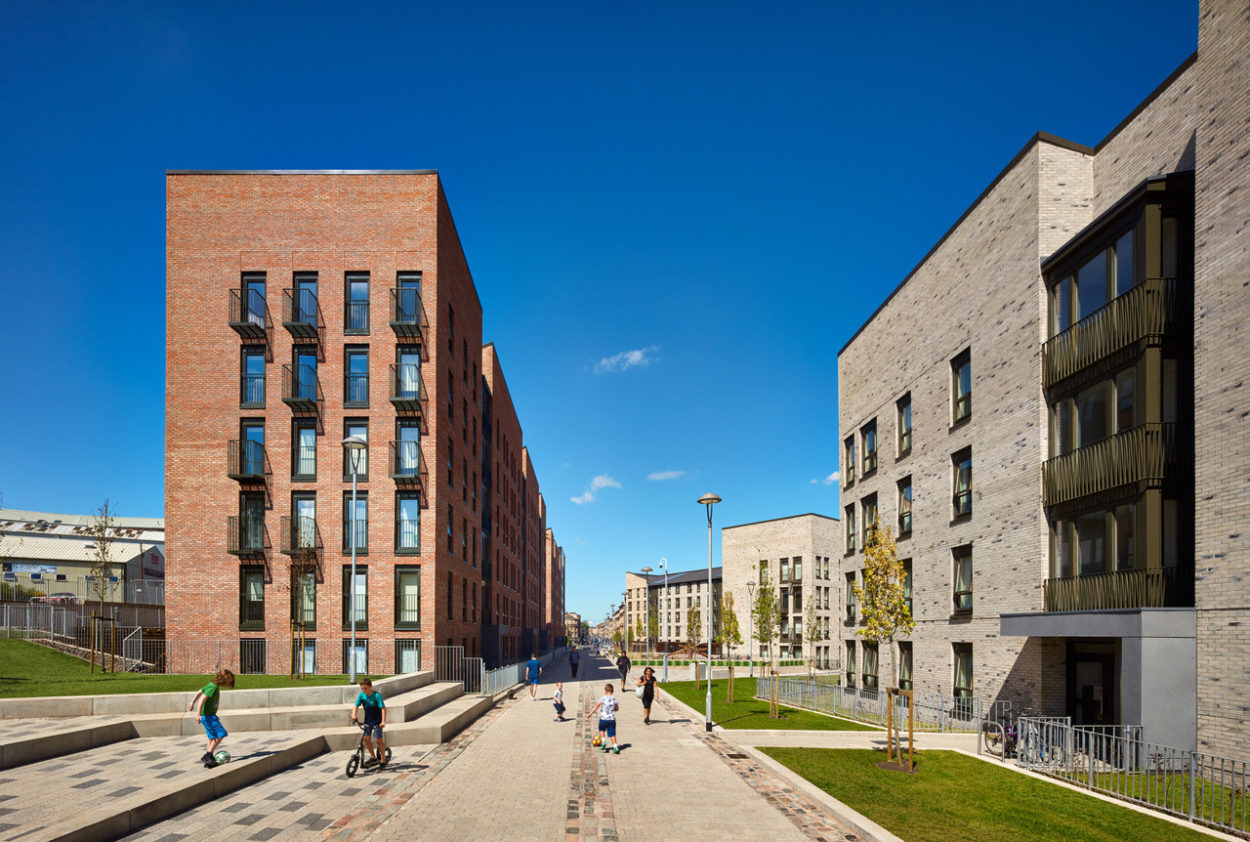 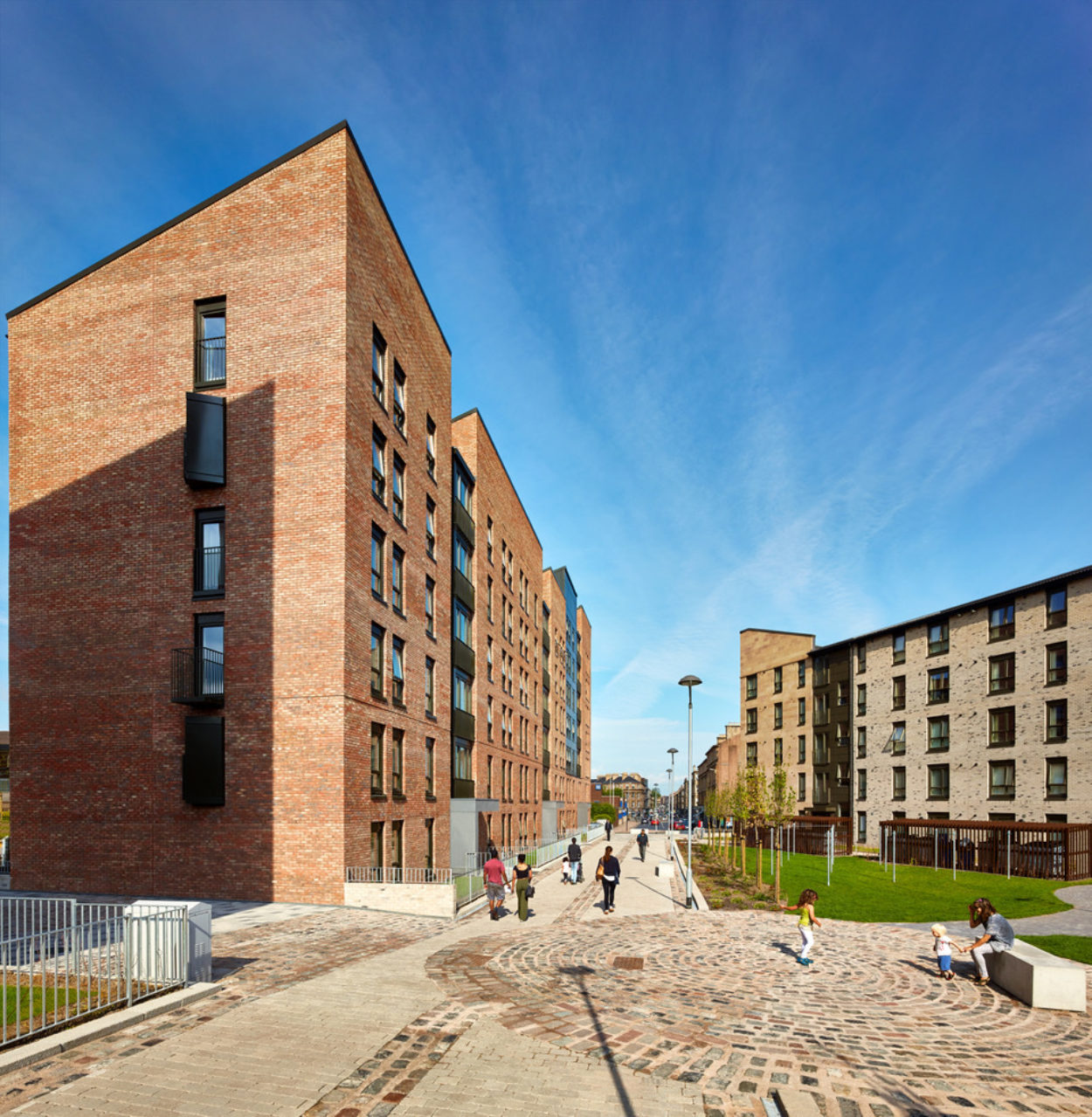 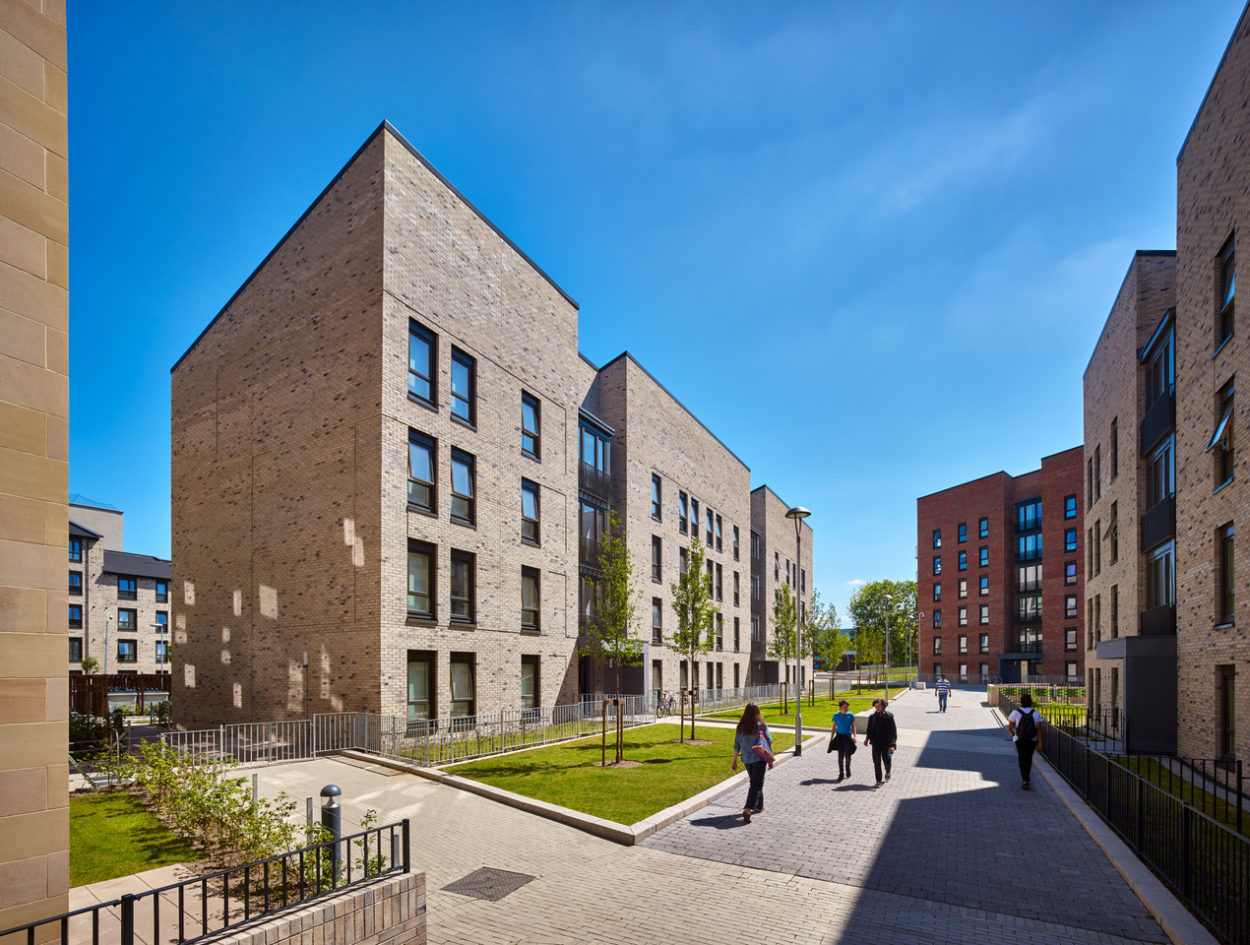 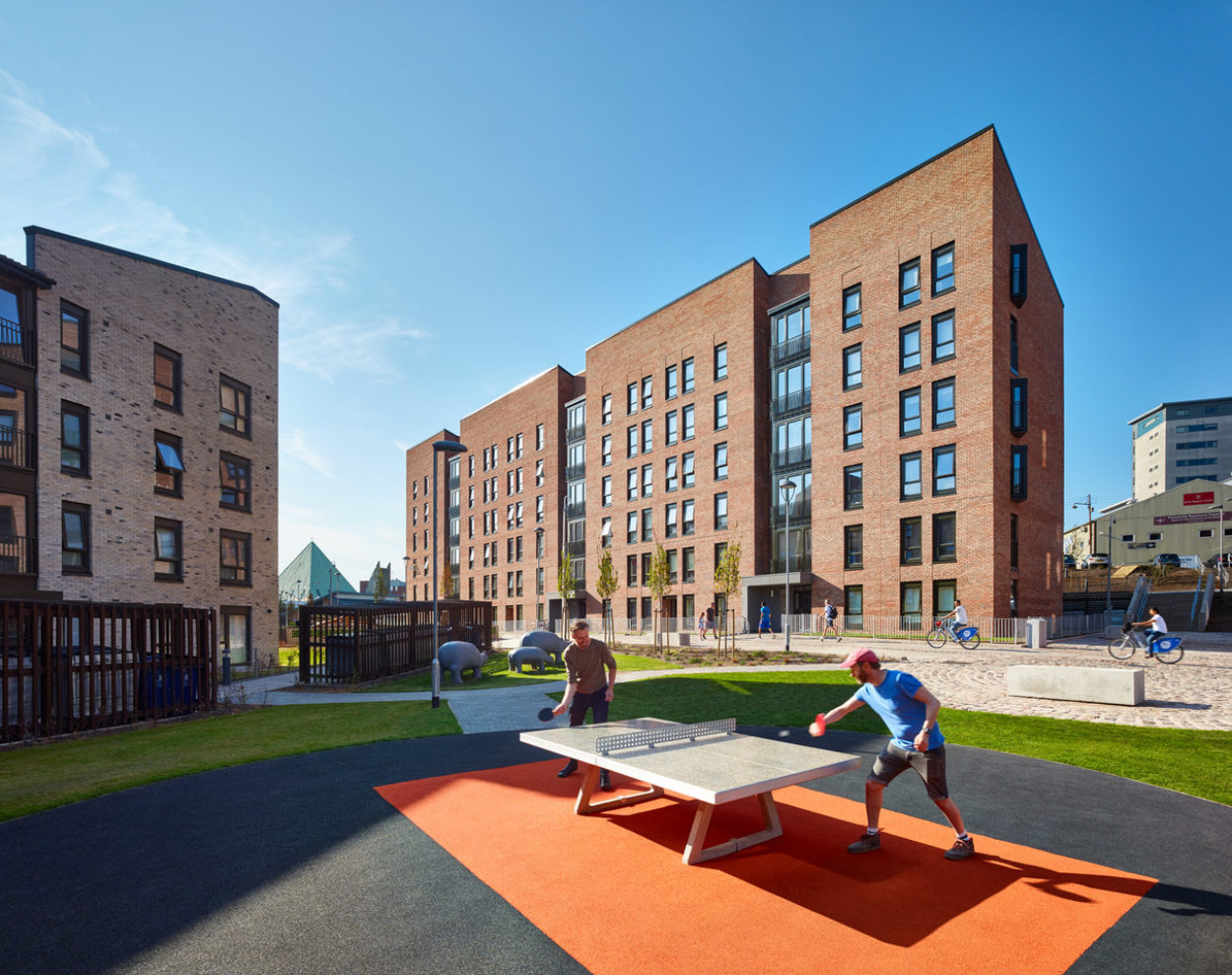 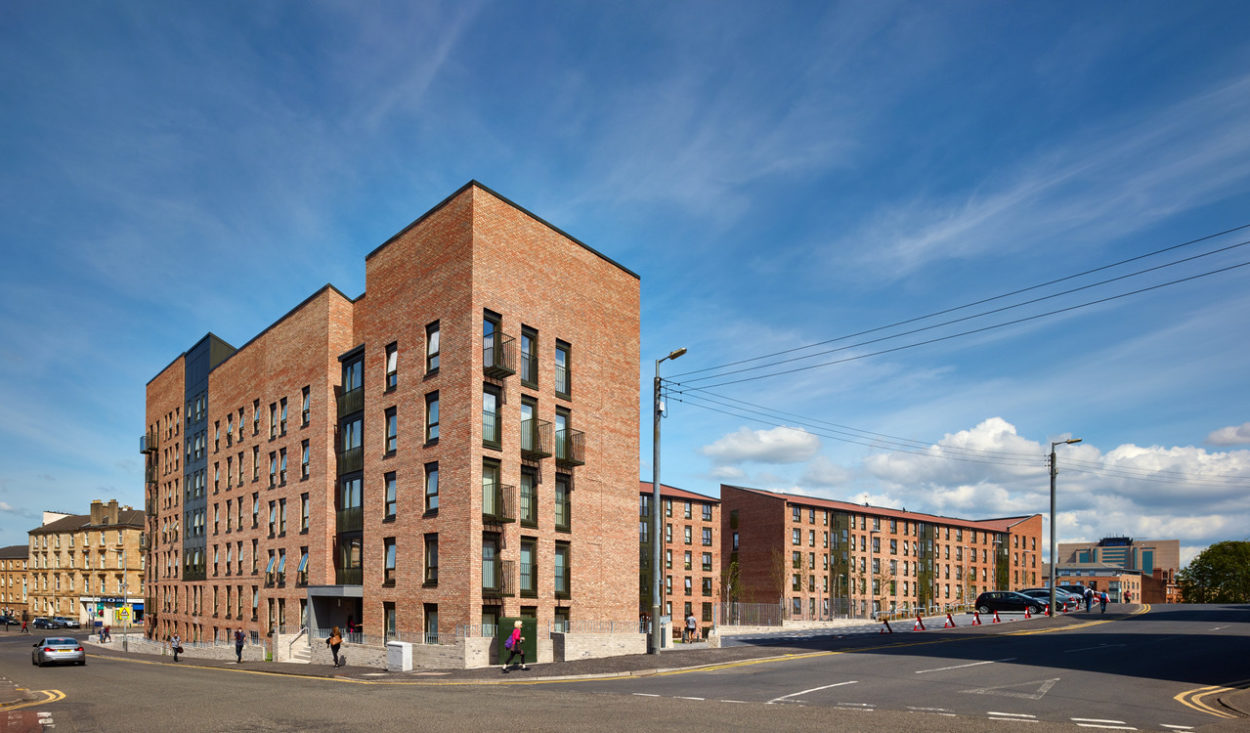 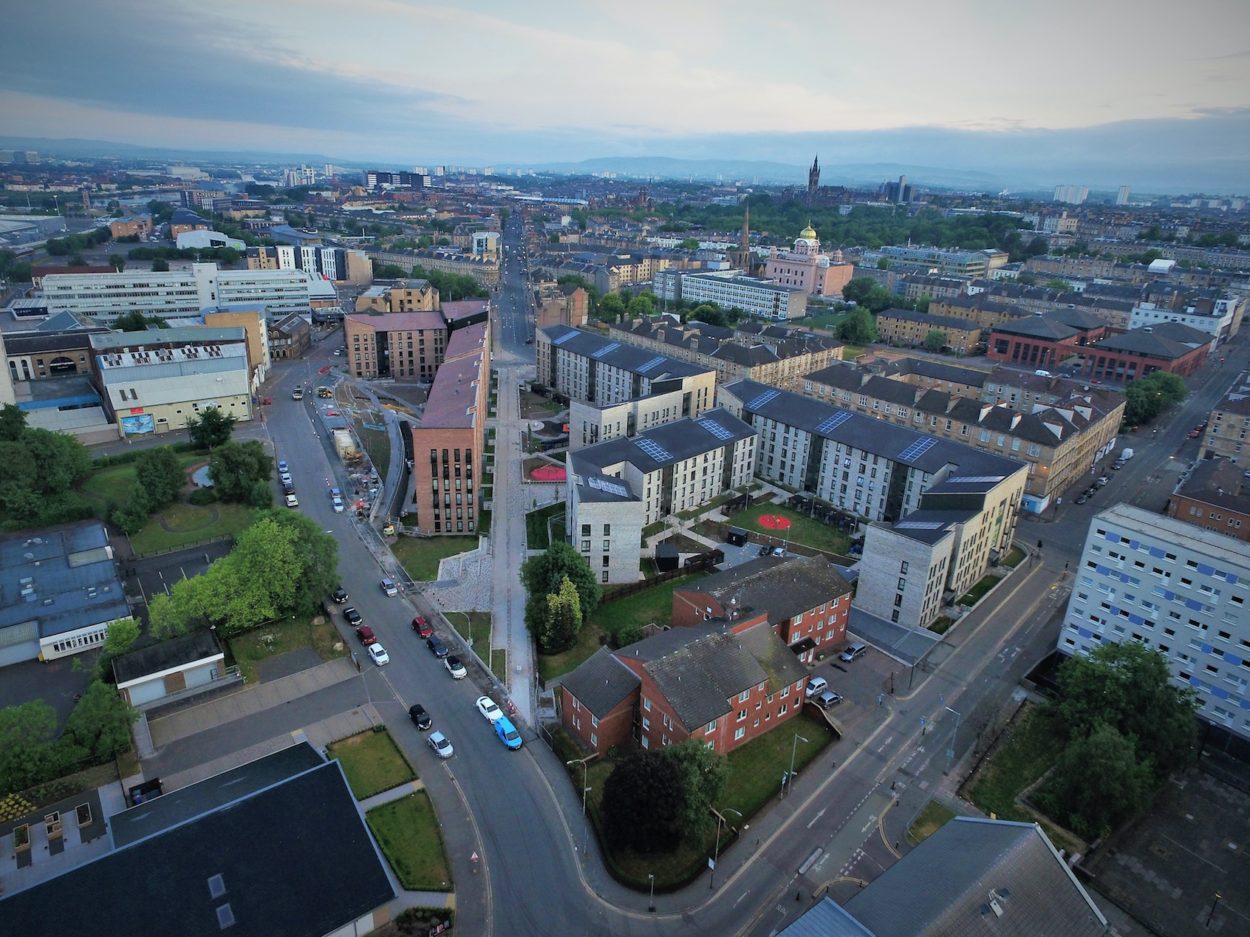